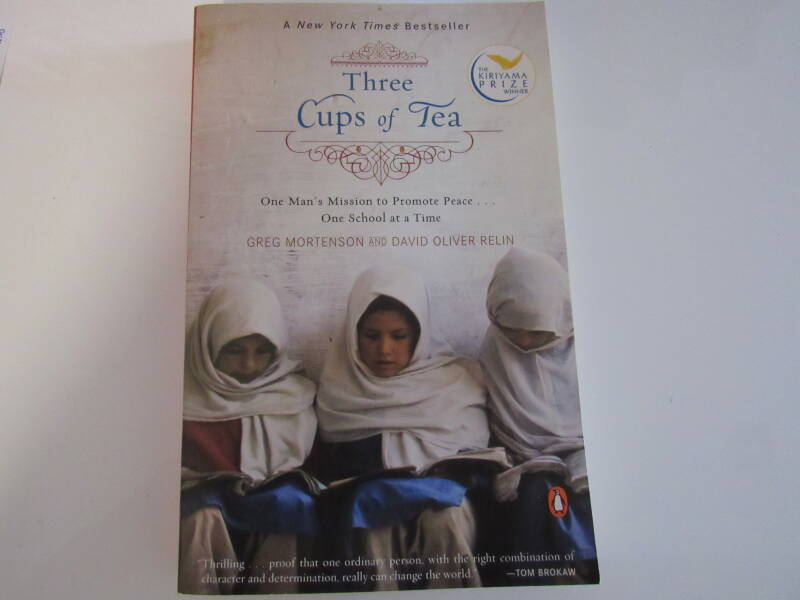 Three Cups of Tea: One Man's Mission to Promote Peace. . . One School at a time.

Three Cups of Tea is the true story of one of the most extraordinary humanitarian missions of our time. In 1993, a young American mountain climber named Greg Mortenson stumbles into a tiny village high in Pakistan’s beautiful and desperately poor Karakoram Himalaya region. Sick, exhausted, and depressed after a failing to scale the summit of K2, Mortenson regains his strength and his will to live thanks to the generosity of the people of the village of Korphe. Before he leaves, Mortenson makes a vow that will profoundly change both the villagers’ lives and his own—he will return and build them a school.

The book traces how Mortenson kept this promise (and many more) in the high country of Pakistan and Afghanistan, despite considerable odds. The region is remote and dangerous, a notorious breeding ground for Al Qaeda and Taliban terrorists. In the course of his work, Mortenson was kidnapped and threatened with death. He endured local rivalries, deep misunderstandings, jealousy, and corruption, not to mention treacherous roads and epic weather. But he believed passionately that balanced, non-extremist education, for boys and girls alike, is the most effective way to combat the violent intolerance that breeds terrorism. To date, Mortenson’s Central Asia Institute has constructed fifty-five schools, and his work continues.