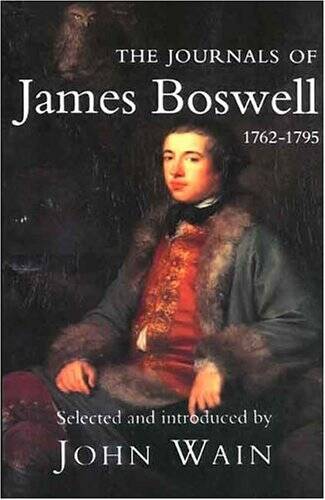 Writer, rake, wit, traveler, and man-about-town, James Boswell kept a diary for thirty-three years, beginning just before his first trip to London and extending over his eventful life till shortly before his death in 1795. This one-volume selection of Boswell's journal entries, gathered and introduced by the distinguished poet and novelist John Wain, brings to life both a pre-eminent chronicler of eighteenth-century Britain and the tumultuous land about which he wrote so well.

Boswell went everywhere, knew everyone, and never missed an opportunity to enjoy himself. His journals are compulsively self-revealing: mad, funny, pathetic, somber, candid about his uncontrollable appetites for women and alcohol, always touching in his fits of remorse and contrition toward his wife Margaret, who emerges from these pages as something of a heroine. Here is Boswell the clubman, the aspiring politician, the Scots laird proud of his ancient family, the observer of life. He collected celebrities (and wrote about visits to Rousseau and Voltaire, a last interview with the dying David Hume, a gossiping conversation with Sir Joshua Reynolds), yet he was no mere success-worshipper; admiration and love for his father-figure, Samuel Johnson, were as genuine as his love of life and his gift for friendship. Boswell once said he wrote mainly to store up entertainment for his afterlife. He was certainly successful in providing entertainment for those who read him now.