The Architecture of Molecules by Linus Pauling and Roger Hayward 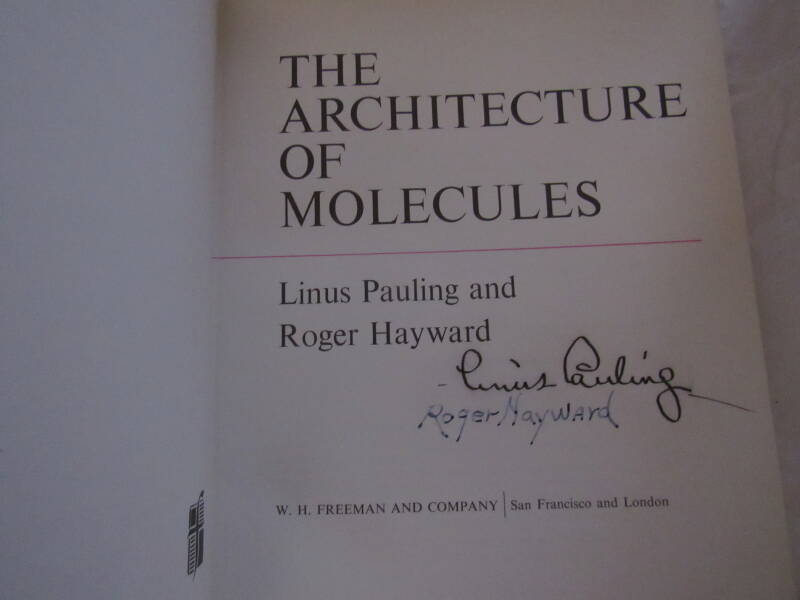 Signed by Both Linus Pauling and Roger Haywood.

During the past 50 years scientists have devised many highly effective methods for studying atoms and molecules, and as a result an increasingly detailed picture of the nature and structure of the world has emerged. This beautiful poctorial volume provides a lucid scientificallyaccuate introduction to the subject of how atoms are arranged and interconnected in molecules and crystals and to the way in which the geometry of this organization accounts for some of the propoerties of substances.

Linus Pauling was an American biochemist, chemical engineer, peace activist, author, and educator. He published more than 1,200 papers and books, of which about 850 dealt with scientific topics and was considered of the 20 greatest scientists of all time. For his scientific work, Pauling was awarded the Nobel Prize in Chemistry in 1954. For his peace activism, he was awarded the Nobel Peace Prize in 1962.

Roger Hayward was a talented artist, architect and inventor who is primarily remembered today for his distinct and prolific work as a scientific illustrator, collaborating for many years with Linus Pauling and Scientific American magazine, among others. At various points a poet and a puppeteer, Hayward was also an expert on optics who played an important role in the development of the Schmidt-Cassegrain telescope.