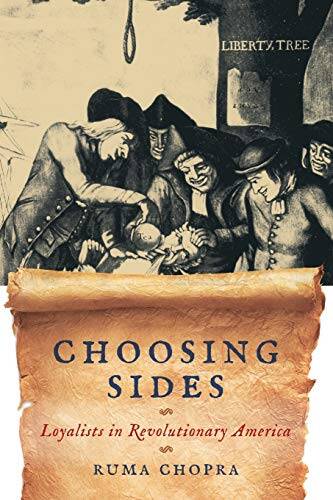 Though scores of texts, films and stories have been told about the American Revolution from the perspectives of our Founding Fathers and their followers, comparatively little is known about those colonists who resisted the revolutionary movement, and tried desperately to preserve their nation’s ties to the British Empire. Choosing Sides: Loyalists in Revolutionary America shows us that America’s original colonies were not nearly as united behind the concept of forming free, independent states as our society’s collective memory would have us believe. There were, in fact, numerous colonists, slaves, and Native Americans who counted themselves among the Loyalists: those who never wanted to sever ties with the English crown and who viewed revolution as an unnatural and unlawful mistake. Too often overlooked, these men and women made valid and valuable arguments against the formation of the United States—both weighing the costs of revolution and the perilousness of existing without divine rule of a monarch— arguments that even hundreds of years into America’s existence are echoed and championed both within and beyond our borders.
Colonists from commoners to clergymen had nuanced and complex reasons for wanting to remain under British control, and an awareness of these reasons and their origins paints a more historically accurate portrait of the American populous around the time of our country’s founding. This volume not only showcases Dr. Chopra’s comprehensive analysis of Loyalism and its arguments, but includes letters, legislation and even poems written by Loyalists during and after the Revolutionary War. Choosing Sides lays a detailed foundation of facts for its readers and provides them entry points to the debate surrounding the genesis of the United States. It is both a primary source and a touchstone for original interpretations and discussions.